According to the Piano Technicians Guild, piano tuning varies according to manufacturers:

“While pianos generally fall into vertical and grand model categories, each manufacturer selects its own materials and utilizes its own unique scale and furniture designs. Every piano requires a different level of maintenance, depending upon the quality of materials used and the design and level of craftsmanship. Manufacturers can provide general advice on tuning frequency but your technician can give specific recommendations based upon your usage and locale.”

Here’s what some of the major piano manufacturers recommend:

Professional service is the key. In the first year, the National Piano Manufacturers Association recommends that you have your piano tuned four times. This is a period of environmental adjustment for a new instrument, and proper attention is important. After the first year, the piano should be tuned at least twice each year, depending upon the frequency of use and atmospheric conditions. Contact Artisan Piano Services to schedule an appointment with our professional technicians to perform this service.

END_OF_DOCUMENT_TOKEN_TO_BE_REPLACED Artisan Piano Services has recently have been given the rare opportunity to do some restoration work on a truly classic instrument: an 1840’s Boisselot et fils piano. This period instrument is very rare, and it is an uncommon thing to be able to see one of these pianos, let alone work on one. Restoring this piano is a great thrill! We will be doing a partial rebuild of the ACTION, including: recondition the action parts to proper working condition, possible re-pinning, replacing key-bushings and key-bed felt as necessary, surfacing the hammers, lubricating the knuckles, and doing a touch-up regulation and voicing. Included is new damper felt and damper regulation. Artisan has also been commissioned to provide a full restoration of the BELLY: replacing the strings, tuning pins, and pinblock. We will repair and recondition soundboard and bridges, as well as refinish plate and replace the plate felt and recondition plate hardware. Importantly, our technicians will provide numerous in-shop tunings before the project is completed, and another one when the piano is delivered to our customer.

Finally, to preserve the original beauty and integrity of the cabinet finish, we will simply touch up the case and re-install some loose decorative brass trim pieces. HISTORY of the Boisselot & Fils

“Boisselot & Fils [i.e. & sons] was a French piano manufacturing company established in 1831 in Marseille, France, by Jean-Louis Boisselot and sons, Louis-Constantin and Xavier Boisselot. The rapid increase in the production capacity of the factory with 70 workers to 300 pianos per year from 1834 shows that father and son had prepared their plan carefully. The constant expansion led in 1848 with 150 workers for the production of about 400 pianos a year. Highlighting this success, he was awarded with a gold medal at the French Industrial Exposition of 1844 (the 10th Paris Industrial Exhibition). Among other innovations Boisselot presented for the first time at the exhibition a mechanism by which individual notes and sounds were identified as Tonhalte or sostenuto pedal today.” (Wikipedia for Boisselot & Fils) According to Pianos Romantiques, “Marseille turned out to be a good choice for setting up a piano factory: salaries were lower than those of the Parisian rivals, cheap exotic wood was [close] to hand thanks to the importance of the town as a port, and there was easy access to important export markets: Italy, Spain, and the colonies via the Mediterranean.” The famous pianist and composer Franz Liszt was a patron to the Boisselots. He owned and performed on a Boisselot Fils. According to Alan Walker, Liszt traveled in October-November 1844 in Spain with his lifelong friend, Louis Boisselot, for a series of concerts. “Liszt played on a Boisselot piano, a powerful instrument especially brought in from Marseille by Louis Boisselot, which accompanied him on his journey across the Iberian Peninsula.” (Franz Liszt: The virtuoso years, 1811-1847)

Finally – Enjoy a Chopin Nocturne performed on a 1842 Boisselot! Complete Piano Restoration Is A Passion For Us!

We are thrilled to have had the opportunity to involve one of our customer’s family story in the feature, which really helped...
Visit Blog » 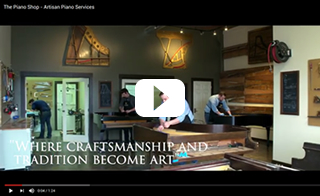 A beautiful video about the restoration process of a classic Steinway & Sons piano. See how detailed our specialists work...
See All Videos » 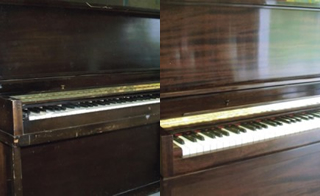 From entering our workshop vs ready for delivery.

A picture says more than a thousand words..., view our before and after slideshow and see it for yourself.
See More »

"Price was very reasonable, great service, and the piano that I was previously told was un-tunable, sounds fantastic."

"I confidently recommend Artisan Pianos to all of my students for their piano tuning and repair needs."

"My piano now sounds like new again! I would highly recommend this company to everyone."

"Artisan Piano Services not only has great service, they have very professional and friendly staff and piano technicians."

"These folks are great! They communicate clearly, return your calls promptly, and always show up when they say they will."

"I highly recommend them! The technicians are prompt, courteous and do excellent work!"

"I was amazed by his experience and professionalism. They have been tuning our piano since."

"My experience with Artisan was outstanding. Got an appointment right away and the tech arrived on schedule."

"Highly recommend this company. Very happy with their work."

"I give Artisan Piano Services a big "5" rating”."

"Artisan Piano Services offers the finest quality customer service and piano care. David is a truly gifted technician and is entirely invested in both his service and his customers. The staff at Artisan is kind and prompt, always making me feel valued. I cannot say enough about these great people. I would recommend them to anyone and will continue to use their services for years to come."

"These folks really know what they're doing. And they are honest and professional in all regards."

"Every tech that comes is pleasant, punctual, efficient, and totally knowledgeable and my piano sounds better than ever."

"Prompt and courteous- it doesn’t get any better!"

"Artisan Piano Services has been repairing and tuning our piano for years and always provides professional, cheerful service. "

"Our piano had some problems for many years and we've been looking for a technicians' help. "

"Honest and generous, a pleasure to work with."

"An old world degree of craftsmanship."

"I highly recommend David Hayes as a piano technician. His knowledge and skill are beyond compare! "

"I picked Artisan Piano Services to tune my piano based on Angie's List so I had an idea about what to expect."

"We've had Artisan Piano Services out to tune our piano twice."

"Our small grand piano had lived in Iowa for 2 years, where there are huge changes in indoor humidity from summer to winter--not good for pianos."

"My experience with Artisan Piano Services was outstanding."

"David Hayes of Artisan Pianos has tuned and maintained the pianos of my teaching studio since 2009."